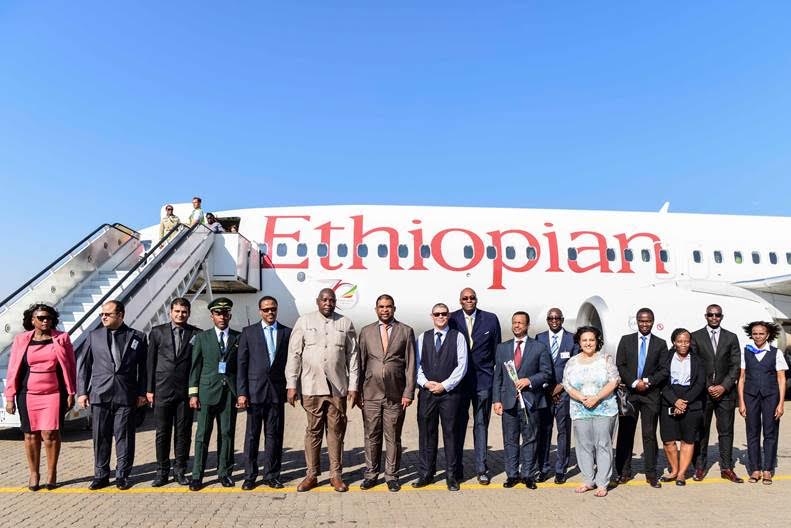 The first-ever Ethiopian Airline flight touched down at Hosea Kutako International Airport on 6 October at exactly 16h30 to introduce the Windhoek- Addis Ababa to much fanfare that included a truly Namibian welcoming dance.

NAC in September announced the imminent arrival of three world class airlines, Qatar, KLM Royal Dutch and Ethiopian Airlines and after Qatar arrival on 28 September, Ethiopian Airlines flew in on 6 October, as Namibia’s connection to the rest of the world continues in style.

During a reception held in honour of the maiden flight , Namibia’s Deputy Minister of Works and Transport James Sankwasa said The timing of the launch on the new route Addis Ababa - Gaborone - Windhoek could hardly be better.

“We value the unparalleled efforts by the Namibian Government to ensure that the continent implement the January 2015 decision of the AU Heads of State, with regard to the establishment of The Single African Air Transport Market by 2017. This endeavour is in Honour of the Yamoussukro Decision for the liberalization of skies, and the establishment of a Single African Air Transport Market within the continent”, Sankwasa said.

He added that, These new route as witnessed over the last two weeks will give an additional lift to trade and tourists and continue the momentum towards closer ties.

“It will enhance a stronger relationship from trade, finance, tourism and cultural exchanges.

NAC acting CEO Courage Silombela the route unlocks new possibilities and opportunities to stakeholders in the aviation industry and beyond.

“We cannot over emphasise the importance of connectivity that the Ethiopian Airlines bring with it. The introduction of new route between Windhoek and Addis Ababa will bring about increased intra African connectivity. it will serve as a springboard to enable connections to 95 new destinations around the world, such as Asia, Europe, Americas, and the Middle east. This will result in reduced connectivity times, increased frequencies, a variety of choices and ultimately reduced travelling costs” Silombela says.

Silombela added that the current infrastructure limitation will not be a set back at our international airport.

“ NAC has developed smart strategies in order to accommodate all new airlines. This is done in terms of slot allocation in the meantime. However, plans to expand our infrastructure are underway to address the ever increasing traffic demands at our Flagship airport Hosea Kutako International Airport.”