NOTICE TO ALL DEBTORS 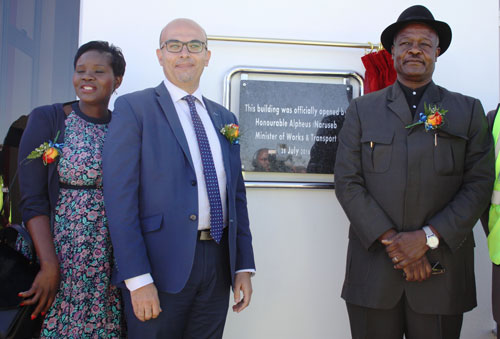 !Naruseb expressed his delight at witnessing another remarkable achievement by the Namibia Airports Company in modernising Namibia’s  airport infrastructure as he opened the N$ 15 Million Fire Station at Eros Airport.

“Key infrastructure developments such as Airports are critical catalysts to economic development. The primary purpose of Airport Fire and Rescue Services at Eros Airport is to mitigate and respond to structural and aircraft fire as well as to respond to medical emergencies to save lives of our passengers, employees and to secure our property”, !Naruseb said.

!Naruseb added that, having witnessed three major airport developments in the last months, official opening of Ondangwa Airport Terminal, Walvis Bay Airport terminal building and now the Eros Airport fire station,these achievements are not only NAC’s but the nation at large, only Namibian can benefit as a country.

NAC Board Chairperson Ndeuhala Lewis emphasized the importance of fire and rescue services at an airport as well as the unique of Eros Airport.

“The pride of any Airport is its ability to respond to accidents decisively and efficiently and this fire station we are unveiling today allows us to respond to emergency situations more rapidly and accurately. The location and convenience of Eros Airport provides a unique opportunity for the NAC to exploit it as a busy airport especially for our domestic routes”.

“The fire station is equipped with two Fire and Rescue Fire Tenders, has water capacity of 2400 litres, 1800 litres of foam and an agent Dry Chemical Powder of 135 kg. This fire station is designed to help the fire and emergency services to meet aviation standards in response time and accuracy. In addition the surrounding community within a 10km radius will stand to benefit from our Aircraft Rescue and Fire Fighting Services as per Namibia Civil Aviation Regulations” El-Kallawi said.

Namibia Airports Company have trained 54 Aircraft Rescue and Fire Fighting Trainees at cost of N$3.6 million to increase the shift strengths of the Fire and Rescue Officers at all our airports